The names etched on the Charles Glenister Trophy are a potted history of time trialling. There are two competition records on there, the most startling being a 53.40 from Alf Engers in 1972. He was later the first man to break the 50 minute barrier in 1978 with a 49.24. It stood for 12 years.

The Bristol South CC Open 25 has been the club’s blue riband event since 1947 and has hosted the National Championship on a couple of occasions.

This Sunday’s race was slightly less high profile and possibly suffered because of the ‘fast’ event on the Sunday in Wales. I first rode the event in 2010 and have done it a handful of times since. Spot the difference (and count the marginal gains): 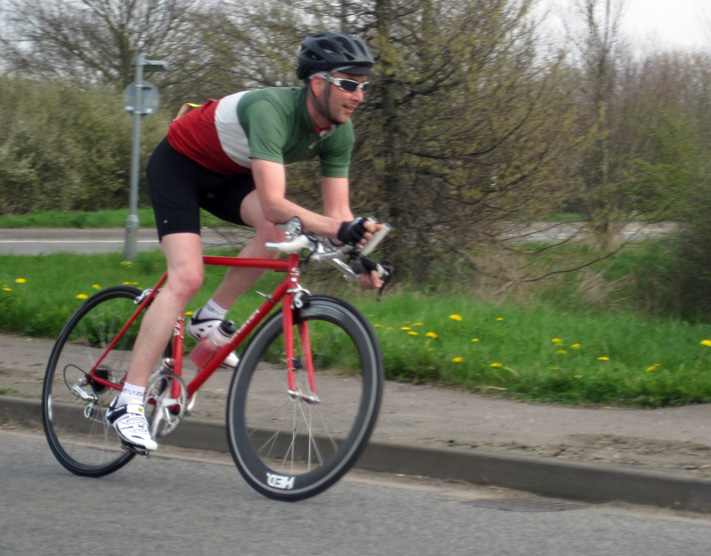 After a strong week and some decent training I was looking forward to the race. I was also the ‘scratch’ rider; nominally at least the fastest on paper. This is good for your confidence, as long as it’s not in error. I also enjoy riding the club events, wearing the red and gold and catching up with other members of the South. For this event John Legge, a previous winner and holder of several club records in the 1970s, had made the schlep over from Portugal to have a dig.

It was windy on the way back, and wet for a significant amount of the time I spent on the course. I got thoroughly soaked and I lost my visor. It fogged up and i tried to clear it but it flicked off and was almost certainly squished to a million tiny pieces by the next car. The Kask visor is a bit shit. The magnets fall off if you look directly at them and it fogs over in the faintest hint of rain. And they are eye-wateringly expensive, which is ironic, considering that they’re supposed to stop this happening. Anyway, the only reason i got the helmet is because it looks slightly less like something designed by HR Giger and thus makes me feel like I’m marginally less of a idiot when riding full-bongo down the Gloucester Road amongst the savagely trendy hipsters (and dirty beatniks).

I paced the course well, it undulates a bit on two short loops off the main road. You never hear the words ‘fast course’ in connection with the U17. It’s slow and hard going with some sinkholes along the racing line. At various points there was also a nasty headwind to contend with. Nevertheless, I felt like I was going well and built up a head of steam on the way back. It was certainly quicker than February, where I struggled to sneak in under the hour. In the end I managed a 55.56, which is PB for this stretch of tarmac. I also won by over a minute from the second placed rider, which is healthy margin of victory. All of which means I get to see my name etched on the amazing trophy. I also picked up the ‘WTTA Spring Shield’, awarded to the fastest rider in the district in this event. It was quite a haul. The club also took the team prize thanks to Dan Alford and the evergreen John Legge.

It’s been a good week and I feel as though some of the hard work done earlier in the season is paying off a little bit. PBs and course records tend to suggest progress.