I  have a stack of books by the side of the bed. It reminds me of an Orb song/track from my youth. Some books go in, then slip down like condensation, pooling at the bottom in a soggy mass. Some go straight in at the top, like West, by Carys Davies, or Where There’s a Will by Emily Chappell. 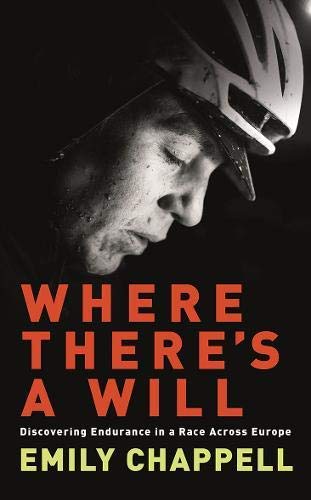 Maybe I’m in an eternal search for the transcendent cycling book. There are people who graze the stratosphere; obvious incendiary comets like Tim Krabbe who bluepencilled everything else ever with his voice and prose.

I love Max Leonard‘s books, because they’re about people and places and mutability and the sublime. And I loved Emily Chappell’s last book for similar and different reasons. When I had the good fortune to meet her and get her to sign my copy of What Goes Around I blurted out something about loving that book because it’s honest. It doesn’t varnish a truth that wasn’t a truth in the first place. It plays with the membrane between the self and the world around us, trying to work out – or not work out – where the body begins and ends and the landscape stops and starts, and these barriers dissolve like the words on the page as they seep into my brain. And I loved it. It’s beautifully written, full of emotion and nuance and it foregrounds the things that matter.

And onto this book. If you’re going touring it’s probably more suited than a biography of Nazi architecture.

Where There’s a Will explores the deranged world of the trans-continental race and a few other super-long distance events. I have enjoyed these vicariously, watching a dot from my phone whilst people do unfathomable things, all the while going to work and taking out the recycling (it explores brilliantly the dot-phenomenon, the distance and immediacy somehow combined in watching a GPS trace on a screen). As such, it’s a memoir, a reflection of how Emily got involved and then started winning super-long races, via staggeringly cold and awful mountain bike races across the ice sheets of Scotland.

When reading this book I found myself thinking about Emily whilst commuting to work, not out of any connection with the discipline, but I think out of some sort of oblique cycling kinship. Throughout the book there are references to her personal life – it’s of a piece with What Goes Around – about recovering from things, coping with break-ups, moving here and there, reacquainting with people, connections and encounters. Cycling is the ribbon that weaves in and out of the narrative, the thread that binds it together – and I know I’m stating the obvious – but there is a thread here about the type of people who cycle and the reasons why, and maybe that’s why the text spoke to me in a particular way. It can’t have been the filth – the unremitting filth of not washing and getting covered in sweat and dirt and filth and sudocrem – because that’s my worst nightmare. It must have been the way that cycling is both the metaphor for life and life the metaphor for cycling at the same time.

I ride because it makes me happy. It helps me cope with things. But… and I forget this, because of the type of insular introspective person I can be, I often cycle when I’m not happy and at those times cycling doesn’t always make me happy, it’s hard and horrid and makes me sad. When I did some LeJoggy bits earlier this year I was unhappy and I really struggled with it. I rode through, and things got better, but the mythical magic mood wand wasn’t immediately apparent. When I commute up and over Stowey Hill in the freezing cold, pedalling softly, I think about how cycling fits in and shapes my life. I draw from this book a sort of honest balance – a life shaped and to a degree governed  by cycling, but not one that is uninhibited joy the moment the pedal is turned. I like the honesty of it.

Maybe, just maybe, it’s about people who live in a space between other people and these people more often than not ride bikes, and have a commonality that speaks to others in the same interstice, and cycling isn’t the panacea for everything, even if it is a force for good. Sometimes you just need to turn around and go home, or slow down.

This book is about two other things (and many other things, but two other things that I’m going to mention). Firstly, it’s about her fellow long-distance riders; Juliana Buhring, Kristof Allegaert and Mike Hall, among a wider cast of amazing people and all the competitors. But it’s about Mike, and about loss, and it is deeply personal and deeply affecting, speaking of loss in the way that we miss a presence, through the constant reminders of absence, a gesture or a place, an echo, a constant knock on the door that we are compelled to answer, only to find an emptiness on the doorstep. It made me cry.

I measure every Grief I meet
With narrow, probing, Eyes —
I wonder if It weighs like Mine —
Or has an Easier size.

The second thing – it’s about women riding bikes. This is a book about bike racing by a woman, about what’s like to be a woman bike racing, for example, what it feels like to have a fully horrible period, “like thunder on the horizon… dissolving what remained of my energy, sucking it into my womb” and how ridiculously hard that makes it. And even better, it quotes Emily Dickinson. You can never have enough Emily Dickinson (see above, and the same applies to WH Davies who she references really neatly) ever. And it’s a lovely super dashy bit:

And it appears as she tries to define a hierarchy of suffering on the bike. The second stanza isn’t referred to; but it’s worth seeking out because somehow I think the entirety of the poem pretty much nails the emotional force of this brilliant book.

It has no Future — but itself —
Its Infinite realms contain
Its Past — enlightened to perceive
New Periods — of Pain.

In that moment, in the text, it describes Emily Chappell’s attempts to define how tough things are. But it also encapsulates so many other threads in this beautiful book; when we’re in the blank, we can’t think of anything outside of it, and yet we are there so often.

So yes, I love this book. I love what it says about cycling and about everything else (did I mention calorie intake?) and about the author: “you’ve got this, Chappell”.

3 thoughts on “Where There’s a Will: Emily Chappell (Review)”